Baida Roti is basically a street food which is a form of stuffed paratha. The origin of baida roti is from the Awadhi region of India. Traditionally it is prepared with minced meat stuffing and the roti is rolled in beaten egg then shallow fried. I have made the vegetarian version of this roti which is very delicious and if you want to try something new for your dinner or party food this is a good dish to put out. I have shallow fried the roti which I have made out of mix of three flours whereas normally it is made out of maida only and the stuffing I have used is that of soyabean. The shallow fried outer crust when served hot is absolutely delicious it is bit crunchy from the out and soft from the inside. Always serve this hot or else the outer crust will become chewy. So lets get cooking….

Salt as per taste

Salt as per taste

1) In a bowl sieve together the maida, makai ka atta and besan. Now to this add the salt and ajwain and mix it

2) Add the lukewarm oil and crumble the flour. Now bind together into a soft dough using water. The dough has be soft like a roti dough.

1) In a vessel take the 4 cups water and bring it to a boil. As soon as it comes to a boil lower the flame and add the soya chunks to it. Cover the vessel and remove from flame. Keep aside for 15 minutes.

2) After 15 minutes strain the soya chunks (they will have doubled in size). Sqeeze the chunks so as to remove all the water from it. this is very important to squeeze it as much as you can or else the stuffing will become soggy.

3) Crush the soya chunks in a mixture jar.

4) Take a pan. In that add oil. once the oil is warm add the hing and garlic. Saute the garlic till it turns bit brown. Now add the ginger and green chillies and saute for a minutes. Add the onions and saute till the onions turn bit brown.

6) Take this off the gas. Add the crushed soya, boiled corn, lemon juice and coriander leaves and give it a good mix. Let it cool off.

7) Once cool add the grated cheese and bind the stuffing together gently. Do not make a dough just bring it all together.

1) Make small balls out of the dough prepared above. Approximately 6-7 balls. Roll these in flour and make rotis out of it of approximately 7 inches each.

2) Take one roti. In the center of this roti add the stuffing (approximately 2-3 tbsp). Fold one side of the roti over the stuffing. Then fold over from the other side. Finally seal from both the edges and make a square pocket. Dust some flour over this and gently press and roll to evenly distribute the stuffing. Do not elongate just slightly press it. The shape should be square. 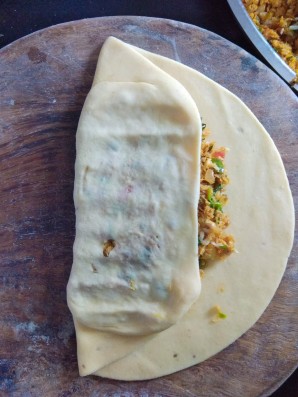 3) In a non stick pan take around 3-4 tbsp oil. Once warm place the roti in this and shallow fry from both the sides till golden brown spots appear.

4) Serve hot with dahi/curd or ketchup or garlic chutney.

I am a lawyer by profession but love to cook. Being a foodie myself I keep trying variations with my recipes. My blog is all about my experiments and experience with food. You can follow me on instagram, twitter and facebook all having handles alawyerskitchen. I am also on the food reviewer panel with GoToChef, which is the perfect platform to check out reviews on various food products and also find recipes using the same. You can also find me on blogchatter https://www.theblogchatter.com/user/shailparekhthosani
and pinterest https://in.pinterest.com/alawyerskitchen2018/

This site uses Akismet to reduce spam. Learn how your comment data is processed.

Try out these fluffy and tasty pancakes (eggless) for your breakfast. For recipe head on to my blog link in bio.
Summers are here and hence the start of ice cream season! Made this creamy and delicious strawberry icecream. Try it out!